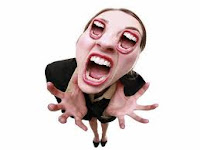 Have you ever had that one annoying person you just HAD to deal with? Well I had mine this month.

After a long stint of being unemployed, I found a new job. It was part time, but it seemed to be just exactly what I needed; until I met Bobbin (named changed). Everyone seemed really nice at this place, friendly, considerate, helpful, ... except Bobbin. She was basically rude, inconsiderate, sharp tongued, unhelpful, unapproachable, and did I mention rude? Anyway, it was apparent we were not going to be close friends. I was informed by others that it wasn't just me she acted that way to, which didn't make it any easier to take but at least I didn't think I had done something to upset her.

One of my last encounters with Bobbin was due to my first paycheck not being deposited into my bank acct the day it was due to. I asked if they were going to give me a manual check, and you would have thought I had asked for the moon. She even resisted in helping determine why it hadn't been deposited, but finally called me at 3pm to let me know my check was waiting. I took it to their bank to cash and managed to have money to live on that weekend. The following Tuesday, she informed me (on the showroom floor) that the deposit had finally made it to my bank and if that was true I would have to repay the money. (DUH??) So I called my bank to confirm the deposit & called their bank to find out the fastest way to return it. I didn't want that money in my account (and not in their account) any longer than possible and I'm fairly self-sufficient that way, (figuring out what needs to be done and doing it) I don't need instructions for every little thing.

So on Tuesday afternoon, I stopped at my bank and withdrew the cash for the same amount and then took it to their bank Wednesday morning. The bank associate knew the correct account to put it into without me needing to know that info and gave me a receipt I could take back to my employer. I put the receipt in Bobbin's "in-box" (as she requested all things to be put) and later on, she waved it at me and asked "What's this?" I told her it was the receipt from the bank showing I had returned the money.

Guess what... Bobbin had a 'fit' that I would actually deposit money into the bank! WOW... I thought it was a good thing to do... returning the money, in cash, as quickly as humanly possible... but she scolded me good for doing that! It's HER JOB to do the banking, she says. It appears she had a chat with the owners about it and the next morning (today) they called me in and said they had talked and had "decided to go in a different direction, that things just weren't working the way they thought it would." After asking them 3 times what the REAL reason was... they finally told me it was the bank incident and if I was "comfortable enough to go and deposit money in their account, they just weren't sure what else I would be 'capable of' in the future" .........WHAT???? HUH!!??? How does this even make sense?

Oh, they were sure I'd "find the right job" sometime in the future, and they'd pay me through the day. OH! Thank-you-very-much! I thought I had FOUND the right job. I think it will be tough for them to find ANY-one to do that job and get along with Bobbin....

The part I found interesting, is that they talked yesterday with her about this, and never called me in to ask me about it. Whatever she told them, they just took at her word, and decided to let me leave. This is the 'procedure' they chose right in the middle of a reorganization going on where they have written an employee manual of steps to follow. I wonder if these are the steps in that manual... I suggested to them, that if something happens in the future involving an employee, they MIGHT think of talking with them about it before making a decision and getting their take on the event. It MIGHT have some bearing on the case, ya know?

I also told them it's a shame they won't get the chance to get to know me, or they would realize how ridiculous it was to even think about "what I might be capable of doing in the future" !
Posted by Ruth at 10:00 AM No comments:

Can't Turn Your Blinker on AND Talk on the Phone? 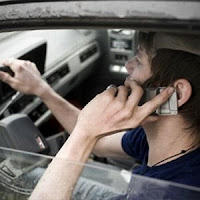 Then HANG UP THE PHONE!!! I talk on the phone in the car, admittedly more than I should. But what gripes me is when someone is so on the phone that they don't signal when turning. COME ON! If you can't signal, then you shouldn't be on the phone. Use Hands Free if you need to be. But the driving rules shouldn't go out the window just because you don't have a free hand.