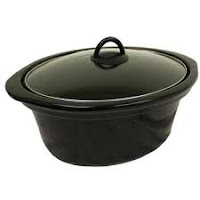 This morning started off like any other morning where our dog thinks she smells a mouse in the house. We have 2 acres around us which means in the winter the field mice do their best to get in where its warm and our dachshund does her best to catch them... and she DOES!
So she runs around whining and stalking behind sofas and bookcases until she finds the mouse and wins the prize. Meanwhile, I had dishes to get to. My crockpot from last night's chili cookoff at church was still soaking in the sink so I decided to get it done. As I lifted it up to pout out the cold sudsy water, my bleary eyes noticed something dark in the sink, almost food-like. So I scooped it up to throw it in the trash only to find it was a water soaked, half drowned mouse! Eeeewwwww! I tossed it back into the sink and quickly placed the crock pot (liner) back on top of it.

It was at that moment I realized I probably broke the mouse's back with the crock pot LOL! but as I turned around screaming, I didn't really care about it for a moment. All I cared about was the fact that I had picked up a wet mouse with my bare hands unknowingly! YUK!!
When my step-son refused to get rid of it for me (woosie), I got a plastic grocery bag from our supply and went back to the sink; lifted the crock pot and saw it was still there, I think at least half dead, if not more. So I placed the bag over it, so I could scoop it up without touching it a 2nd time. I carried it to the back door and heaved it as far as I could out the door into the yard. I think it went all of 10 feet! LOL ........It'll do.... for now.
Later I did go shake the mouse out of the bag wrapping and saw it was frozen solid and quite dead.. but I figured it'd make a good snack for some bird or other animal so I was helping the food chain. Not the way I had anticipated starting my day.
Posted by Ruth at 1:30 PM